Love Finds You in Treasure Island, Florida by Debby Mayne 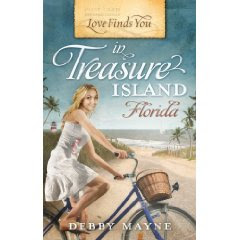 Debby Mayne is a gifted and talented writer who has the ability to bring a setting to life. Her characters are people you want to spend time with and stay with you long after you’ve finished the book. Love Finds You in Treasure Island, Florida, is such a fun read that I finished it in two sittings and enjoyed every minute of it, laughing and grinning so much that I was certain my face resembled the Joker’s.

What can I say? I love this story! Why? Because….

Jerry Simpson is a real sweetheart, and his parents are a riot. However, will his devotion to his parent’s keep him from a relationship with Amanda? Will Jerry allow an incident to keep him from Amanda forever? And just who is this Matthew fellow to Amanda? Is she in love with him?

When love strolls into Amanda Burns’ bicycle shop in the form of Jerry Simpson, will she watch it stroll right out again even though she’s deeply attracted to him? Something holds Amanda back from giving her heart to him, or to any other man. Can she let whatever is holding her back go before it’s too late?

Mr. Simpson, Jerry’s father, is obsessed with searching for treasure. Will he ever find it? And if so, will it be everything he ever imagined?

Mrs. Simpson, Jerry’s mother, goes into the matchmaking business, and her scheming antics are hilarious. She’s bound and determined to see two people she loves get hitched. Just how far will she go in accomplishing this task? And what risks are involved?

Lacy, Amanda’s sister has her own romance going on. Does her spoiled ways and selfishness destroy any chances of a long-lasting relationship?

Timmy is a troubled child. When he meets a certain person, something happens? What? And is this person a good influence for Timmy or a bad one?

You can find the answers to these questions in, Love Finds You in Treasure Island, Florida. This story is a super fun, relaxing, giggle a minute read.

Thank you for saying such sweet things about my book, Debra! I enjoyed exploring all the different relationships as I wrote it.

Debra, what an awesome review! You really know how to peek a person's interest. This book sounds like a blast. Thank you.

Debby, you're welcome. I meant every word. *smiling*

Sharon, Thank you for letting me know that my review peaked your interest. That makes me feel SO good.

Debra, I loved this review! Debby really is a gifted writer. I have several of her books, and I love everyone of them. I'm looking forward to reading this one, too! Talk to you soon. Debra Collins

This book sounds so great and it looks so pretty, I sure would love to win it.
May God bless all of you in your writting.

just dropping by to say hi!

just dropp'n by to say hi!