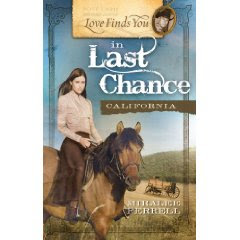 Love Finds You in Last Chance, California By Miralee Ferrell is a sweet romance.

Even though there is mystery in this story, it’s a very relaxing, soak-in-the-tub-hot-water-and-bubbles sort of read.

Miralee Ferrell’s descriptions are exquisite. She has way of placing you in Last Chance. You can smell the air, hear the creak of saddle leather, the crunching of leaves, and the cocking of guns. The tension is tangible, and the love is sweetly palatable. Miralee’s characters are memorable. Hey, speaking of characters…

Alexia is one tough cookie. No murdering thief is going to get the best of her. Except…Is the man she falls in love with that thief? After all, he’s been hiding a secret from Alexia, and since he’s shown up, her horses are disappearing faster than a gunslinger’s draw.

Alexia’s Father dies of natural causes. Or did he? Before he dies, he hides a precious cargo. Will it remain hidden? Or, will it eventually be found? Just what exactly is it he’s trying to hide that’s so valuable? Or is it valuable? Plus, Alexia is crushed and feels betrayed by her father when she discovers that he, too, has been keeping secrets from her.

Evil lurks around the corner disguised as a friend. But which friend? Will the real enemy please stand up?

Justin discovers that Alex isn’t his friend’s son, but the man’s daughter. Does this make a difference in his plans? A saloon girl comes to town and wants something from Justin. Something she’s willing to risk her life to get it. What does she want? And why?

Many people’s lives are in danger. Why, and who, wants them out of the way?

Well, if you want to know the answers to all these questions, you’ll just have to buy Love Finds You In Last Chance, California to find out. Money well spent.